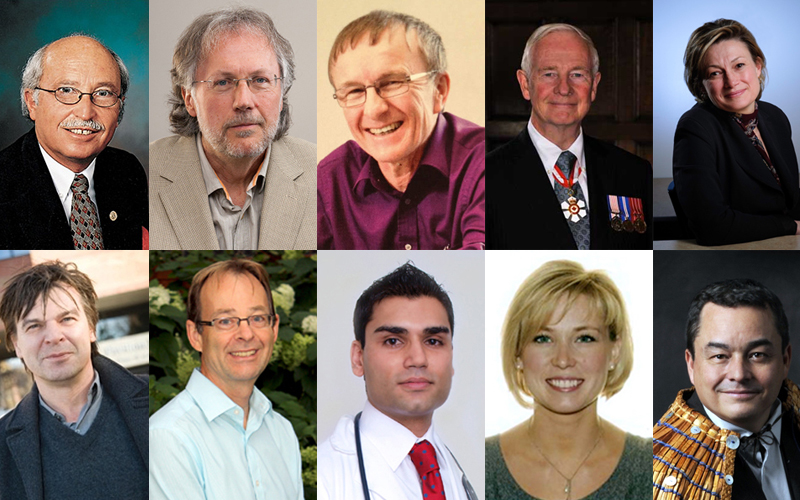 Congratulations to all honours and awards recipients! For more information on the awards and recipients, please visit http://www.cfpc.ca/major_awards/.

This award is named in honour of Dr Cal Gutkin, Executive Director and Chief Executive Officer of the CFPC from 1996 to 2012.

This is a new award for 2013, which recognizes a dynamic leader in Canadian family medicine distinguished for his or her vision, innovation, and relationship-building with organizations that support and positively influence the ever-changing role of the family physician.

This year’s recipient is Dr Cal Gutkin, CCFP (EM), FCFP, Executive Director and Chief Executive Officer of the College of Family Physicians of Canada (CFPC) from 1996 to 2012.

This award honours the memory of the late Dr W. Victor Johnston, the CFPC’s first Executive Director (1954 to1964).

The award recognizes a renowned Canadian or international family medicine leader for continuous and enduring contributions to the specialty of family medicine in Canada or abroad.

This award, named in memory of Dr Jean-Pierre Despins, CFPC President (1995 to 1996) and Chair of the Board of CFPC’s Research and Education Foundation (1999 to 2000), honours a CFPC family physician member identified as an outstanding advocate and public spokesperson for family medicine, family physicians, and their patients.

Honorary Membership may be conferred upon individuals who are not family physicians in Canada. This honour recognizes physicians or members of the public who have made outstanding contributions to the CFPC, the discipline of family medicine, the medical profession, or the health and well-being of the population in Canada and globally.

This year’s recipients are:

Family Medicine Researcher of the Year

This award is named in honour memory of Dr Ian McWhinney, the first professor and chair of a Canadian university department of family medicine, (Western University, 1968 to 1987).

Dr Irwin Bean was born in Ogema, SK and practised in Regina and Toronto. He was President of the College of Family Physicians of Canada (CFPC) from 1962 to 1963 and the first Chair and ardent supporter of the CFPC’s Committee on Examinations. The Irwin Bean Award, established in 1986, recognizes a family physician who achieved the highest standing among practice-eligible candidates in the CFPC’s Certification Examination in Family Medicine.

This year’s recipient is Dr Sohan Mansingh, Mission, BC, who provides a full-service family practice with an interest in chronic disease management, preventative medicine and mental health.

Dr Bob Robertson was born in England and practised in Alberta from 1962 until his untimely death in 1982. As President of the College of Family Physicians of Canada (CFPC) from 1980 to 1981, his main concern was the underfunding of medical systems by provincial governments. The Bob Robertson Award, established in 1982, recognizes an individual who achieved the highest standing among family medicine residents in the CFPC’s Certification Examination in Family Medicine.

This year’s recipient is Dr Michelle Kraus, Toronto, ON, who looks forward to a career that includes emergency medicine, palliative care, and teaching and nurturing future family physicians.

The CFPC-Scotiabank Lectureship is awarded to an outstanding national or international figure who has contributed significantly to medicine, family medicine, and/or the health and well-being of the population in Canada and/or around the world.